Thursday, April 21, 2016 — My Night Job is an action arcade game – and a very particular job offer: inspired by monster movies of the 80s, My Night Job’s hero Reggie prevails against monsters in true old-school-2D-sidescroller manner.

Every player who takes on the job of a monster hunter in My Night Job receives the order to successfully escort 100 survivors out of 25 scenarios in an old mansion to a helicopter. But evil monsters want to prevent this rescue! In My Night Job, players don’t just use their bare fists to get the survivors to safety. Altogether, Reggie has 63 weapons at his disposal. The hero turns just about anything in the old mansion into a weapon as long as it isn’t nailed down: when push comes to shove, even an umbrella or a coat rack will do! For rougher ventures, players use an axe or various firearms. The longer you play, the higher the level of difficulty. That guarantees prolonged gaming fun. At least as long as Reggie withstands the growing challenges. A round of My Night Job ends when all 100 survivors are safe or Reggie bites the dust. But be careful: The monsters taking over more than three rooms will also end the hunt!

My Night Job is a tribute to 80s horror movies and games. The setting, which is drawn by hand, was inspired by 80s horror movies. The charming pixel look practically breathes the gloomy atmosphere of the monster hunt. Tenderly staged and animated enthrallingly, My Night Job, even with its retro style, is a real eye-catcher which will also draw in your friends. Thanks to its high degree of detail, My Night Job invites you to extensively explore and investigate. Attentive players will continuously find new allusions to genre classics from the 80s. Who will find them all?

The repeatedly awarded web version is now available on Windows! 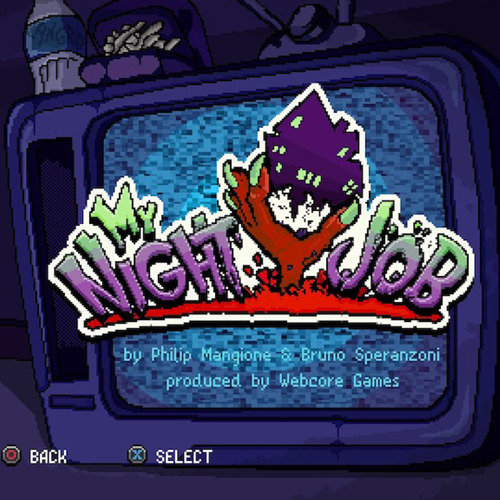